Autumn is truly the best season; every year I forget how much I love it until it rolls round and catches me off guard with how beautiful it is and the nostalgia it evokes.  I am not a summer girl – shorts and bikinis are not my thing; my freckly complexion has only two settings – pale with blue veins or a cross pink when exposed to the sun.  I tolerate salad but long for stodge.  Spring is fine; both my boys were born in the hopeful months of April and May, which was handy since they never slept and I spent my days walking the pavements with them.  Winter on the other hand means Christmas and family together, which is always special.

But autumn…the chilly blue sky mornings without needing to defrost your windscreen, comforting casseroles or curries in the oven, ugg boots on, cosy jumpers out of the bottom drawer, big scarves make a return too and evenings are blissfully spent snuggled under a warm crochet blanket on the sofa.  Chimney pots smoke into life and the incoming dark nights have that musty Halloween smell about them.  Food is reassuring; slow cooked stews that falls apart after an all-afternoon spell in the oven; pies with burnished pastry, baked potatoes with blistered skins.  I lived in Quebec for a year after I finished university and an outdoorsy guy I met there told me he put on a stone in preparation for winter every year to keep him (and his organs) warm.  I like to think this is what autumn is for – preparation for the harsh and bleak chill ahead.  With that in mind, autumn weekends often involve a cake – both the baking and eating providing comfort and pleasure in their own way.

After last week’s triumphant first bake from At My Table, choosing a second cake was tricky, and would be a tough act to follow.  One stood out in my orange, leafy autumn frame of mind – the ginger and walnut carrot cake.  At the age of 36, this is my first foray into crystallised ginger – shocking, I know.  I do love a cake with a satisfying heaviness, and the ginger promises to give the carrot a fiery kick in a warming direction.  The most difficult thing in this bake is chopping the ginger and grating the carrots – otherwise it’s a wet-into-dry cake, again with vegetable oil, so no heavy machinery required – soothing in itself.  Crumbling walnuts in your hands is so satisfying it should probably be turned into a form of therapy.  Unfortunately I was a bit short on them so had to substitute around a third with some chopped almonds, which I’m hoping doesn’t tamper too much with the texture (spoiler – I don’t think it did).

And…here it is – no walnuts to decorate so I freestyled with pecans, but it really reminds me looks-wise (aptly enough) of the autumnal birthday cake from How to be a Domestic Goddess.  The icing is delicious – it’s so smooth and brings a creamy but with the added juice from the fresh ginger, it’s a still-fragrant respite to the nutty sponge.  What does the cornflour do to it to make it so luscious?  I don’t really know, but it works so well.  The texture is a lovely mix of nutty coarseness, mottled with pretty orange flecks of carrot in a moist crumb.  I wasn’t sure how I’d feel about the ginger, but it definitely only enhances the recipe and it’s warm rather than fiery – think of it as the toasty glow from the embers of a fire rather than the harsh flame of a newly-lit one.  With that gentle hum and the velvety frosting, this cake is a lovely baking start to October – it’s inviting and homely and all that is good about home cooking.  Now all I need are some visitors before it goes the way of last week’s cake… 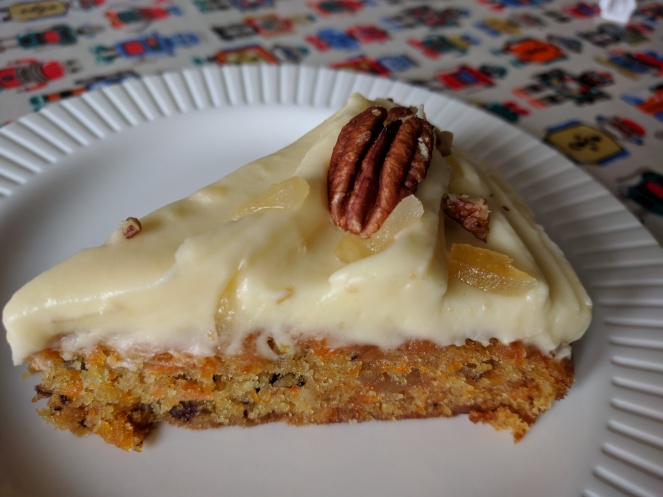 Hi! Welcome to my little blog